Texas is the place where I was born and raised, and I lived there for roughly two decades of my life before I moved away in 2003.

Texas is a place that holds many stereotypes: cowboys, NASA's iconic "Houston, we have a problem", the TV show Dallas, and the greatest shadow over all of them, George W. Bush. Over the period of time that I've been gone, roughly 11 years, the outside perception of Texas has deteriorated immeasurably. If I am asked where I am from, and I say the name of Texas, most of my interactions with people of other nationalities immediately transfer to political commentary -- even during a gynecological exam.

When I think of Texas, it's so complex to me, full of contradictions and extremes. It's a massive place, a little larger than France, yet somehow it's reduced to a couple of simple ideas. Through a combination of photography and writing, I was able to explore both its complexity in substance, as well as the complexity of emotions that I experience when I am there now. I am of Texas, yet I am not at home there.

The images included in this series are 35mm color film. 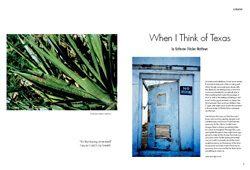 When I Think of Texas
GUP Magazine #33 - The Stories Issue, May 2012
Open column (PDF, Tearsheet)